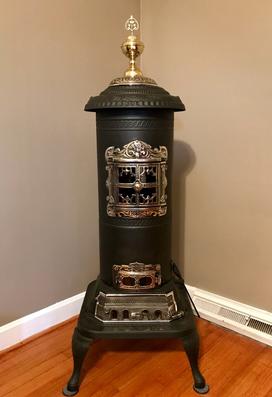 The Bell 120  was said to have been owned originally by Teddy Roosevelt's cook. 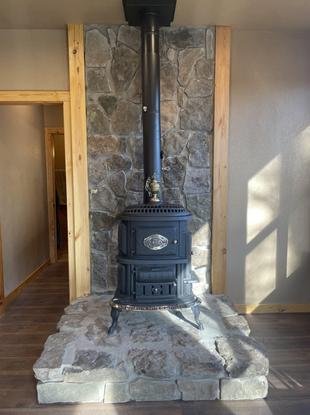 But really, it looks like it's been right there in southern Ohio all along. 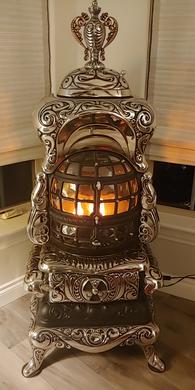 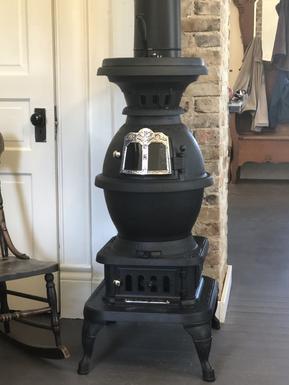 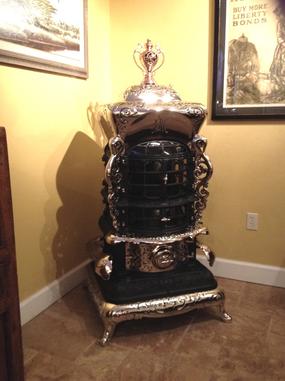 This beautiful baseburner was made by Germer Stove Co., of Erie, PA, circa 1900.

Made by Fuller and Warren of Troy, NY,  the owners of this gorgeous large oak stove initially rescued it from their family cabin in the Adirondacks, then brought to us here in N. Carolina for a full restoration. They then brought it back to their beautiful home in Pennsylvania, and soon, they will headed to Texas, where it will be hooked up and ready to glow through those big mica windows. This stove can travel! Stay tuned for an update from Dallas : ) 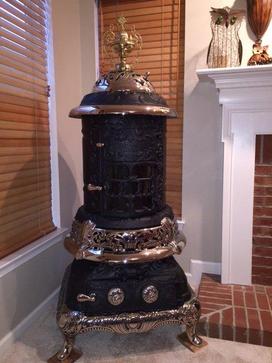 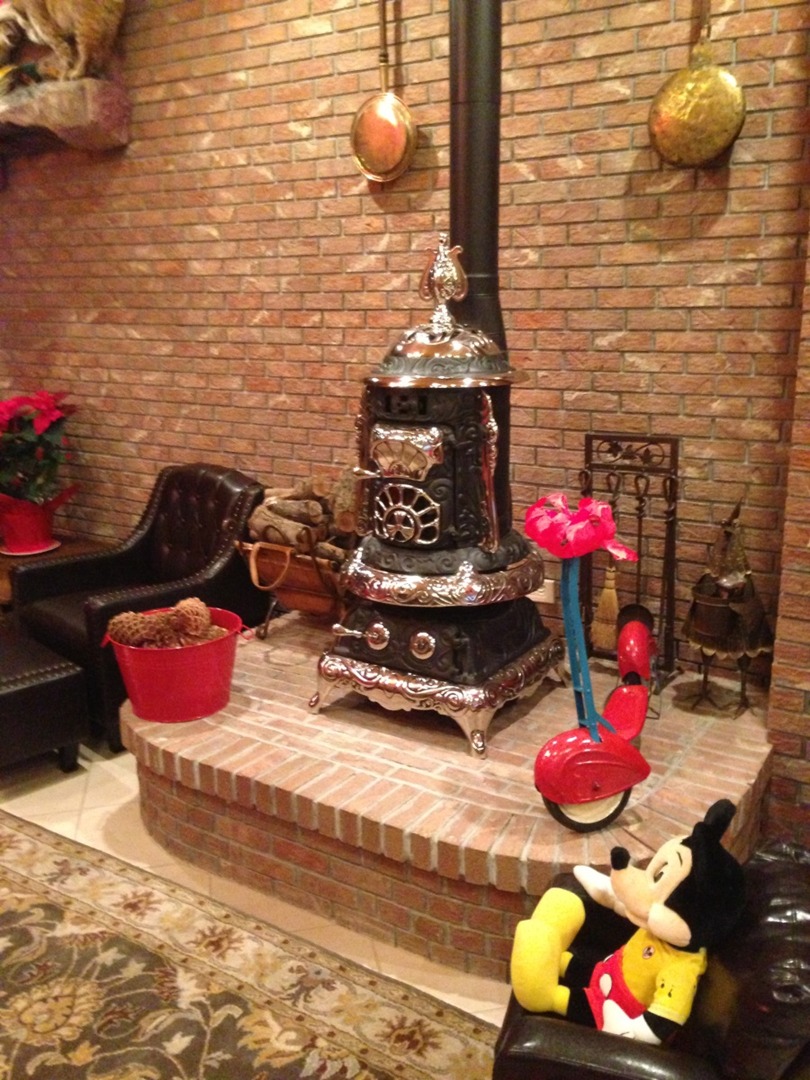 The Florence Hot Blast No. 53 by C. Emrich Co., of Columbus, Ohio, made its way all the way to California!

The Favorite baseburner 14 in its new home in Colorado Springs with its beautiful lighting effects, while awaiting a real hook-up at their future home. 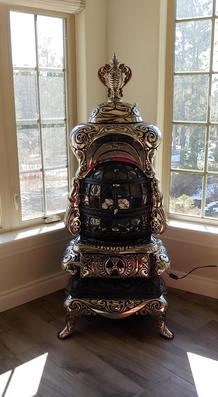 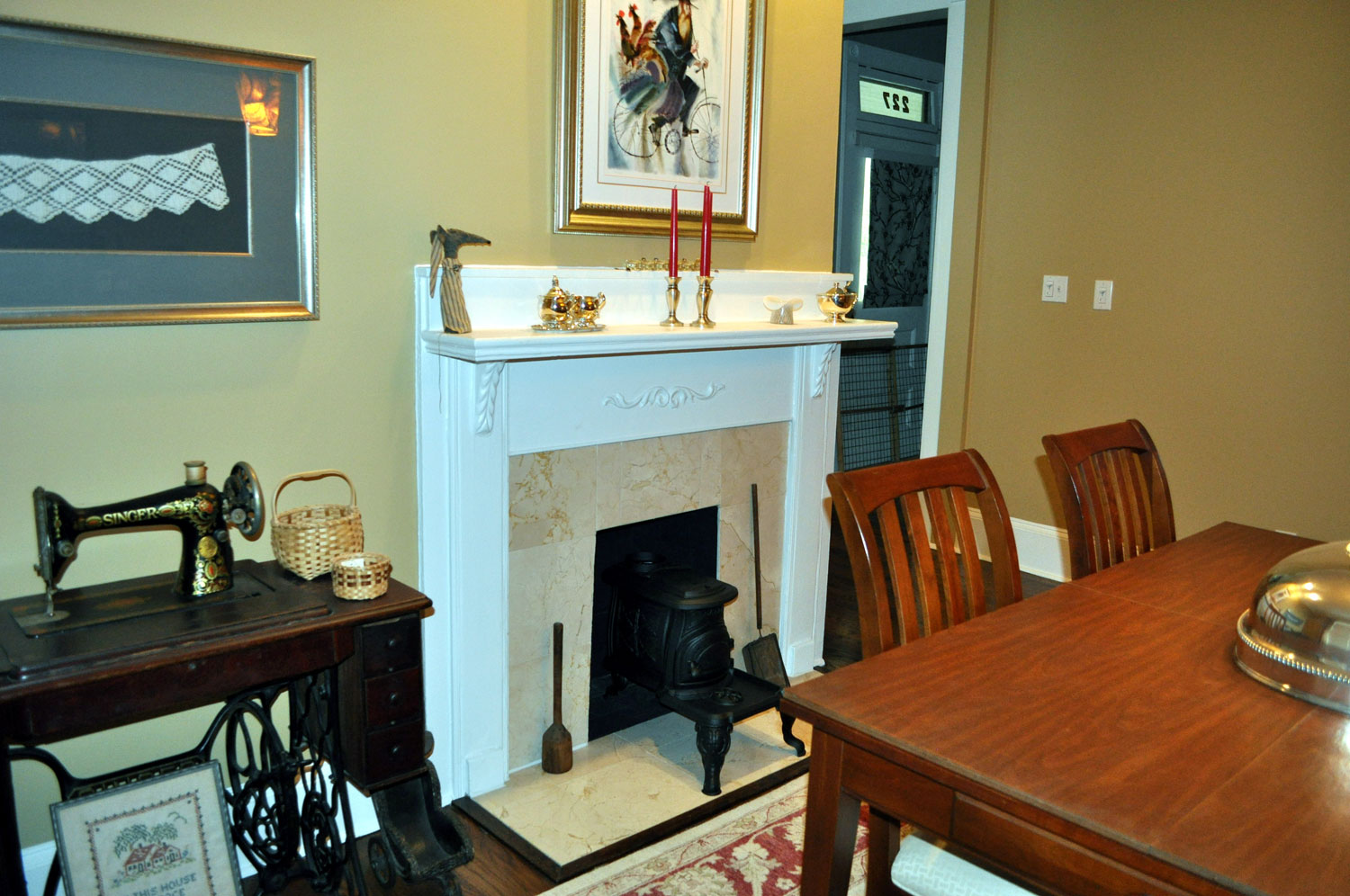 They look very happy in their wonderful new home!

Beautiful hearth and really nicely featured in its new home in Arkansas. Made by Co-op Stove, Cleveland, OH.

Betty gets a good amount of use in her beautiful new home, for breakfast, biscuits, pies, and dinner, too. Also, in the colder weather she warms up the upstairs of the house as well. 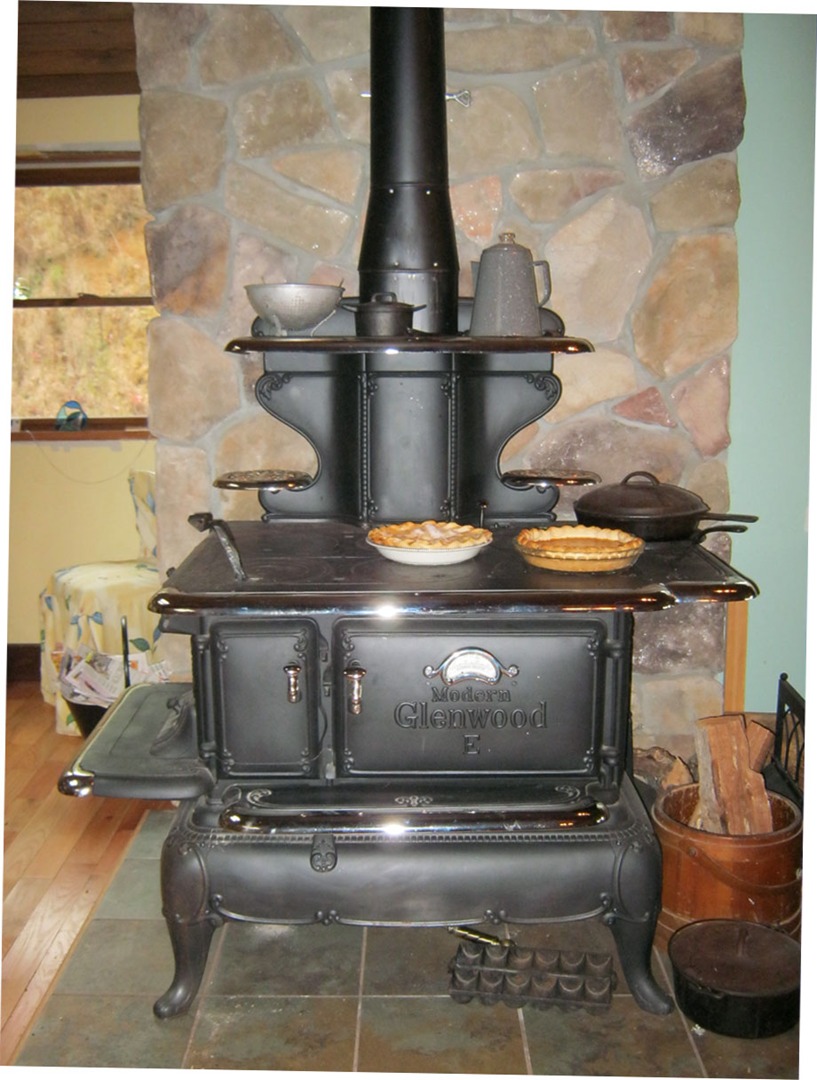 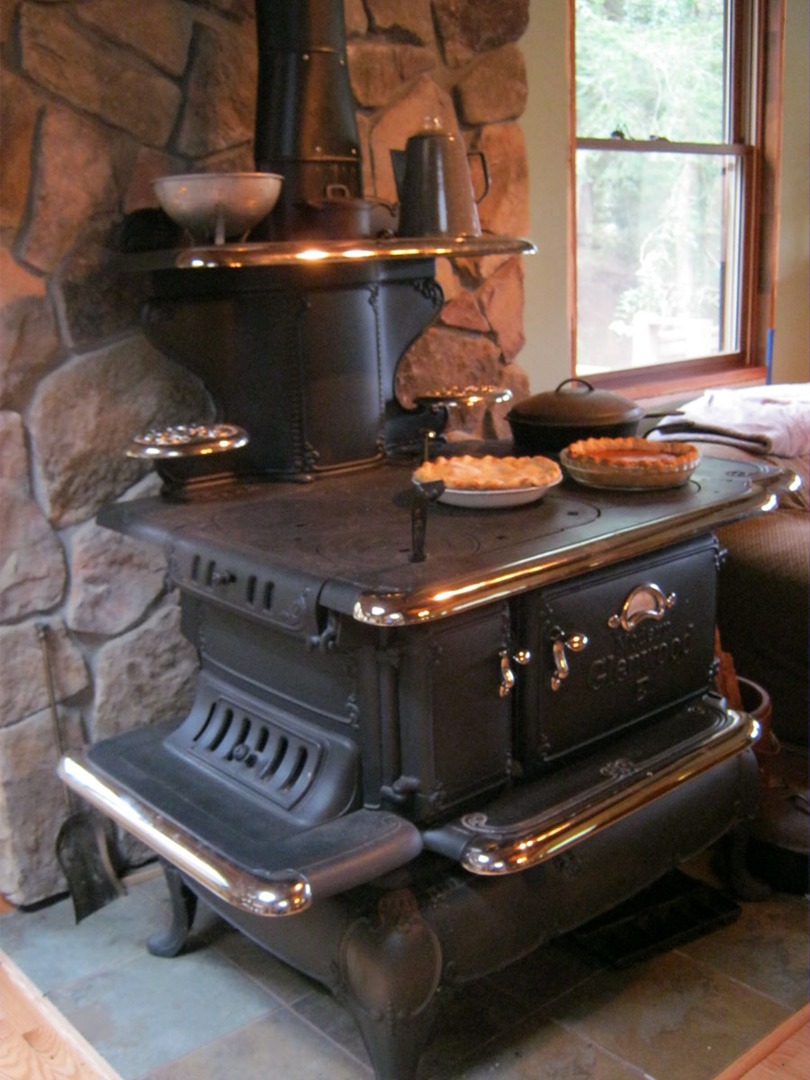 Stoves in Their New Homes

Went from Belews Creek, N. Carolina, to Ginger Creek Stoves, N. Carolina, and then to its new home back where it originated, in its home state of Pennsylvania. Absolutely perfect setting!

Back in commission, as it was intended to be. Wow!  This really shows what the reflector does. That's not another window up there, that is a reflection of the fire. And the dragon head wings look to be in charge! 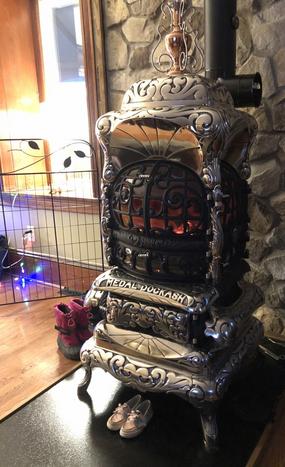 This unusual potbelly stove with mica windows started out at Rathbone, Sard & Co., in Albany, NY, in 1883.

More than a hundred years later, has been to Southern Vermont, and North Carolina, that we know of.

This extra large baseburner by Wehrle Stove Co., Newark, Ohio, travelled to California, and N. Carolina, to its perfect new home in Tennessee. This is a big one. They don't come much bigger than this bb.

Now, over a hundred years later, rescued, fully restored, and waiting to be hooked up, it found its place in the sun in north-central Florida!  Ready for the next hundred years! 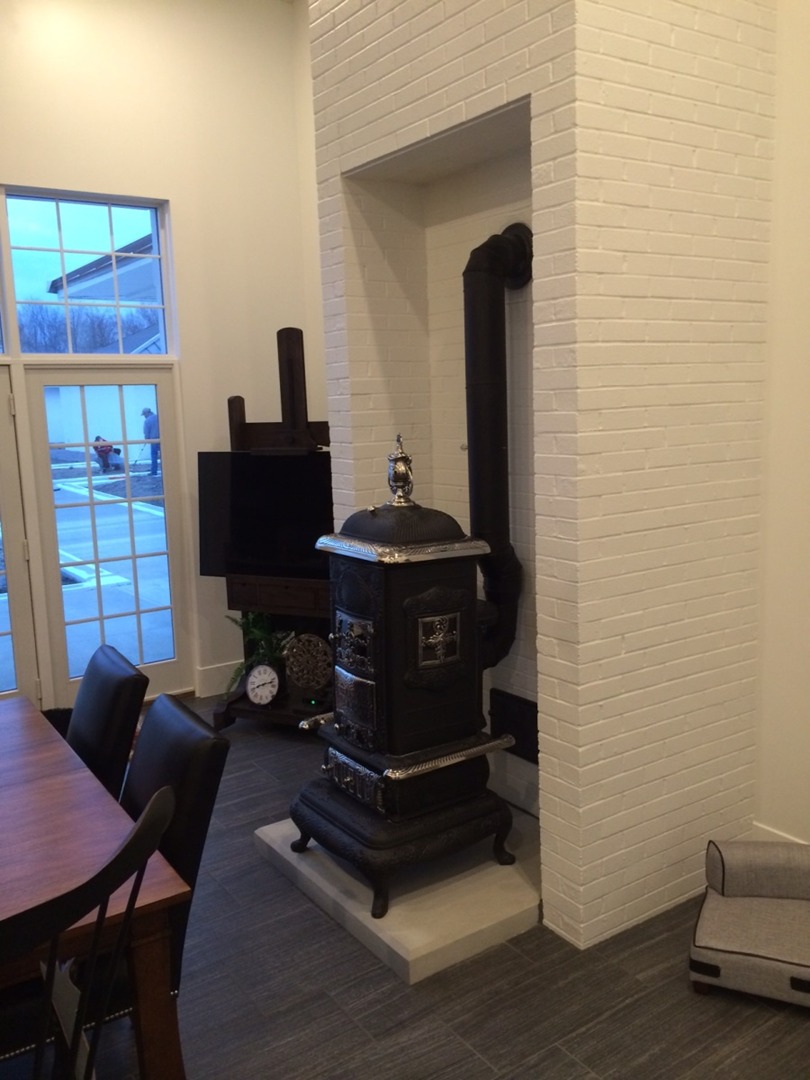 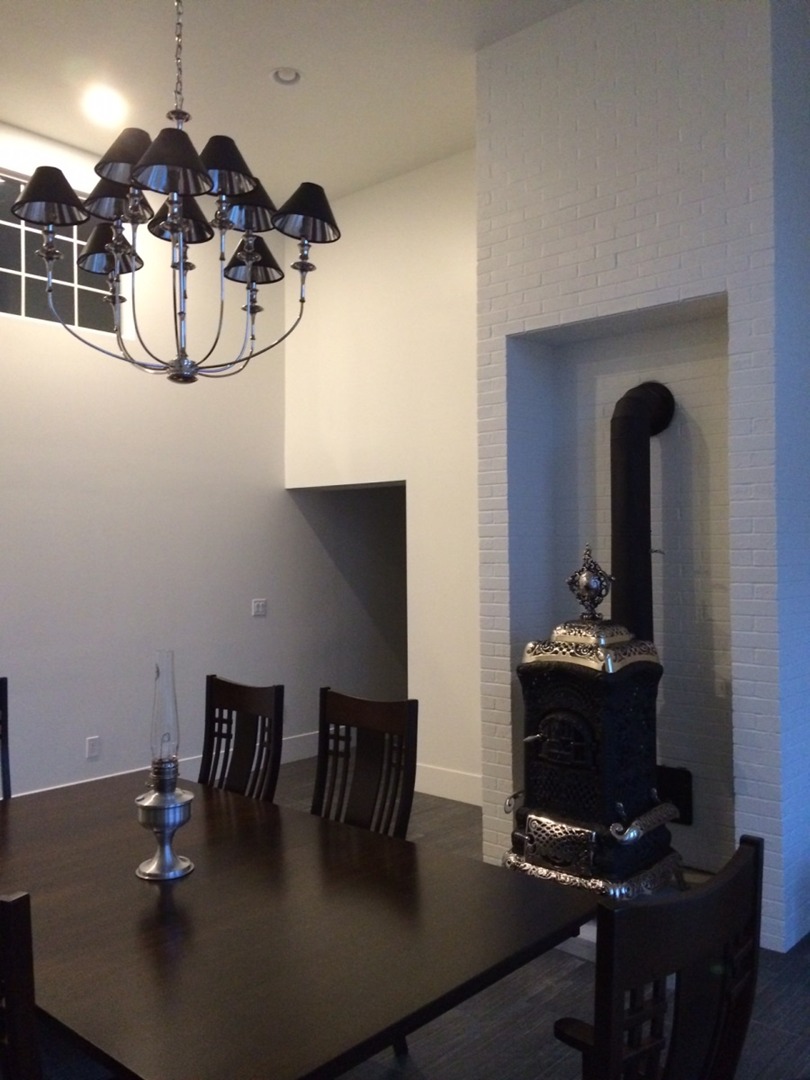 have found their niche in Ohio.

Moore's 403B and Grand Glenwood

The Kalamazoo Brilliant, made by Kalamazoo Stove Co., of Kalamazoo, Michigan, now has its own custom made hearth setting in a beautiful  new home in the Kentucky countryside.

The New Globe Hot Blast found its perfect home high in the Smokey Mountains of Tennessee. (it gets cold there!)

And the Garland 200E, a very historic oak stove, found its way there, too.

The Garland has a very special significance to its new owner, as he worked with the newer Garland restaurant stoves extensively in his career as a chef.

Not many of the original Garland Oak heaters are anywhere to be found. This one surely found its right place! 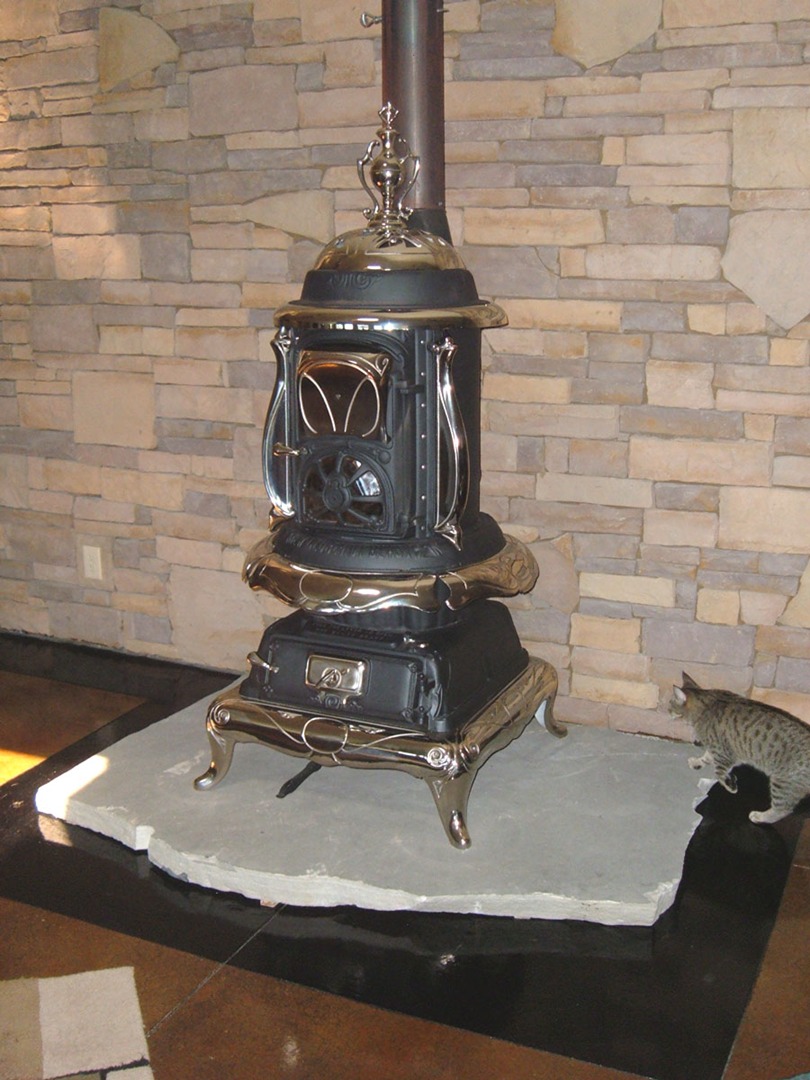 Each antique stove is unique and individual. They all have a lot of history behind them.  "If they could only talk!"

Here are a few of the stoves we've restored, in their new homes.

"Cast from the Past" 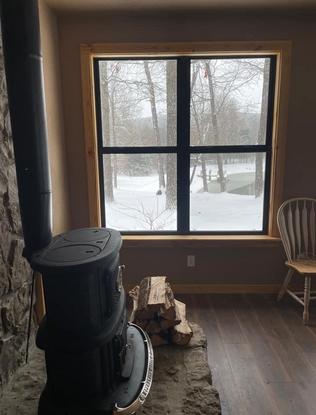 Now rescued and restored, and in its new home in N. Carolina. 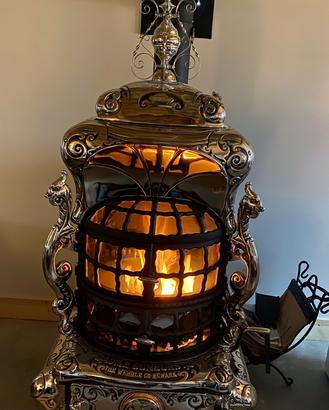 Made by Scranton Stove Works, 1905 -1910. One of the  most resplendent baseburner stoves in existence. The detail and aesthetic complexity, coupled with its amazing functionality are unsurpassed. 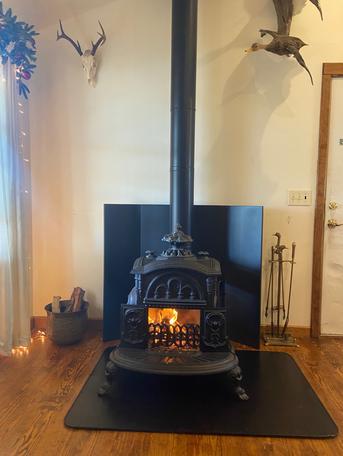 And is now in it's beautiful new home at a large almond farm. Mickey looks very comfortable there by the stove! Yay!

'The Landing' museum at Three Rivers Park in Shakopee, MN is a great place to visit and learn about our American history, as it was lived in its original setting. To find out more, visit their website at:

The Jewett 'Alert' No. 25, 1868 antique box stove, is featured at 'The Landing', a museum in Shakopee, Minnesota.  (formerly 'Murhpy's Landing'). It has been put right into use in the 1850's farmhouse there at the living museum. Here, Brenda is making bean soup and fried corn mush. 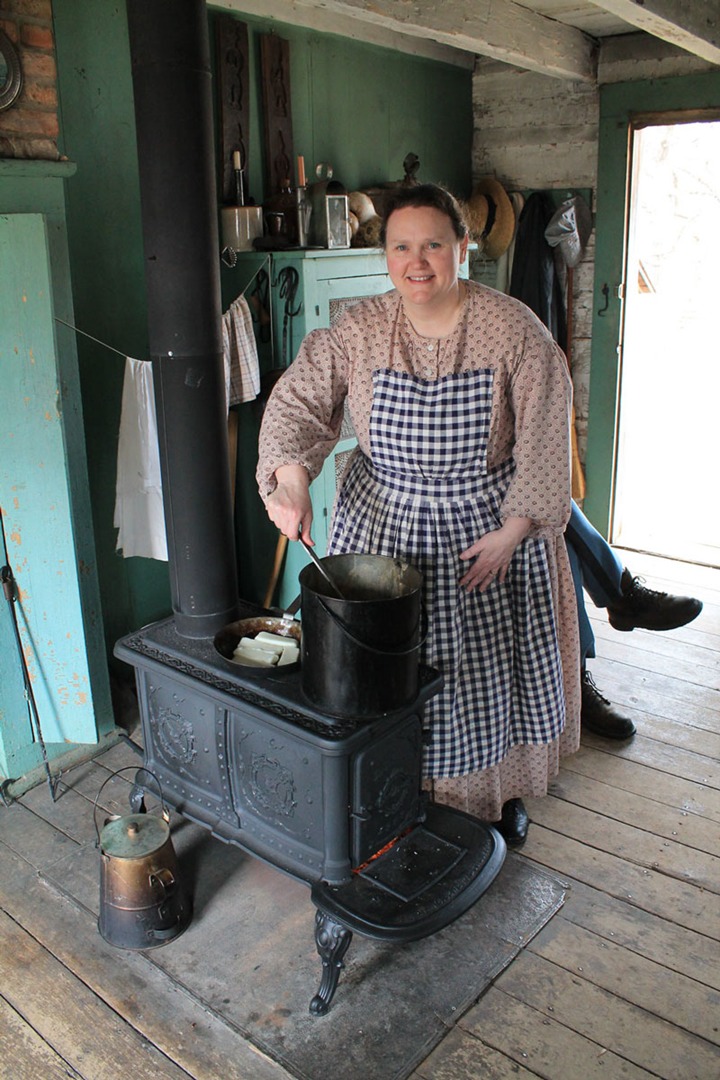 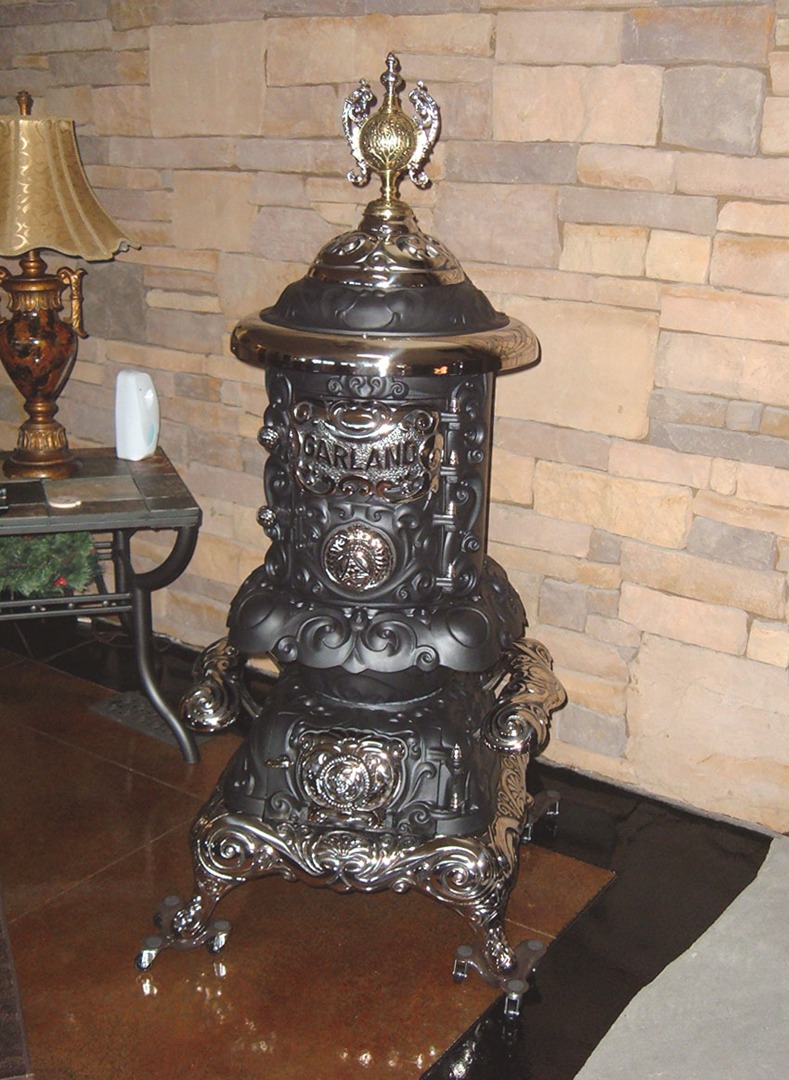 They have combined the look of the new modern construction and the ornate antique stoves. What an impressive effect!  And more to come...

We can't imagine a more perfect setting for this beautiful stove! 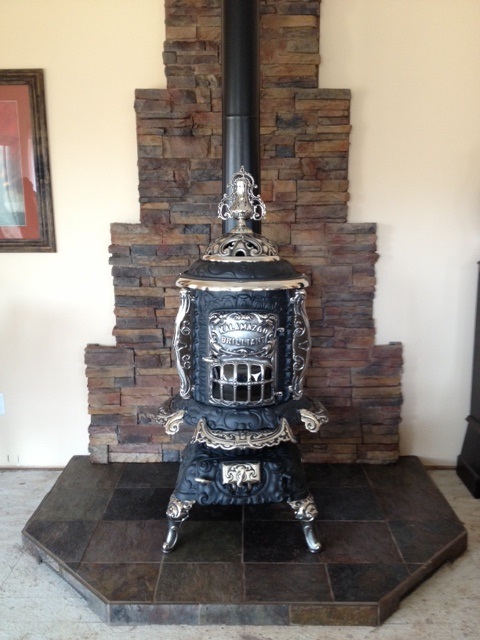 The Florence Hot Blast No. 53 found its new home in the Blue Ridge Mountains high atop Jonas Ridge in North Carolina. 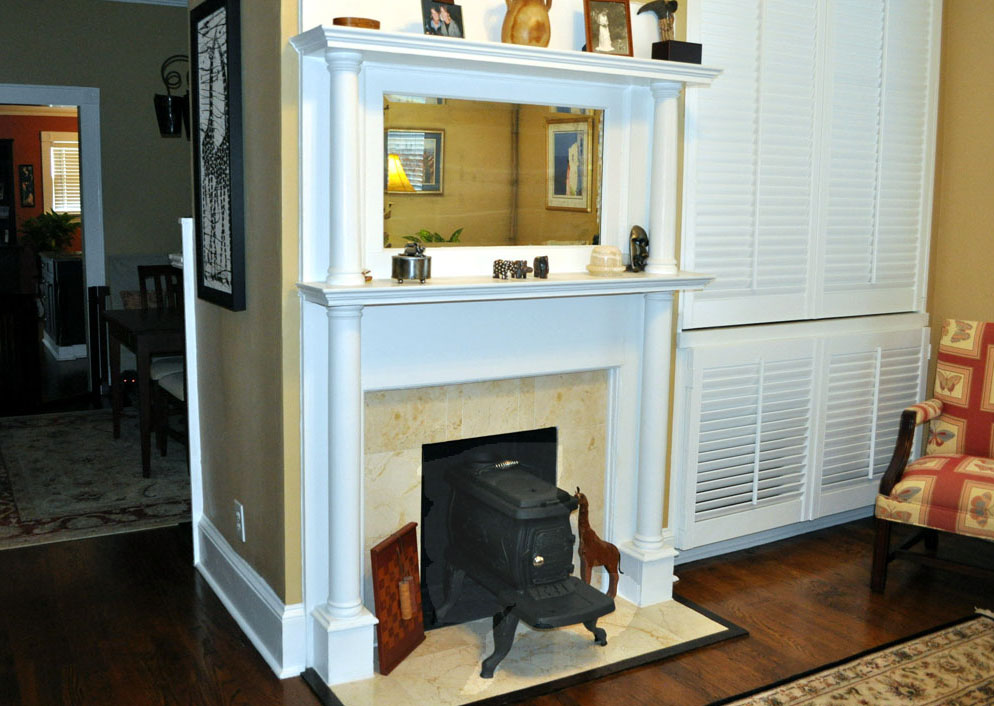 Two great antique box stoves, the Champion 118, made by Wehrle Co. Makers, of Newark, Ohio, and the Alcalde, (maker unknown, but rescued from a RR shack in Tehachapi, CA by its previous owner), are now in Raleigh, NC, each  nestled in their own fireplace.

Champion No. 118 and Alcalde 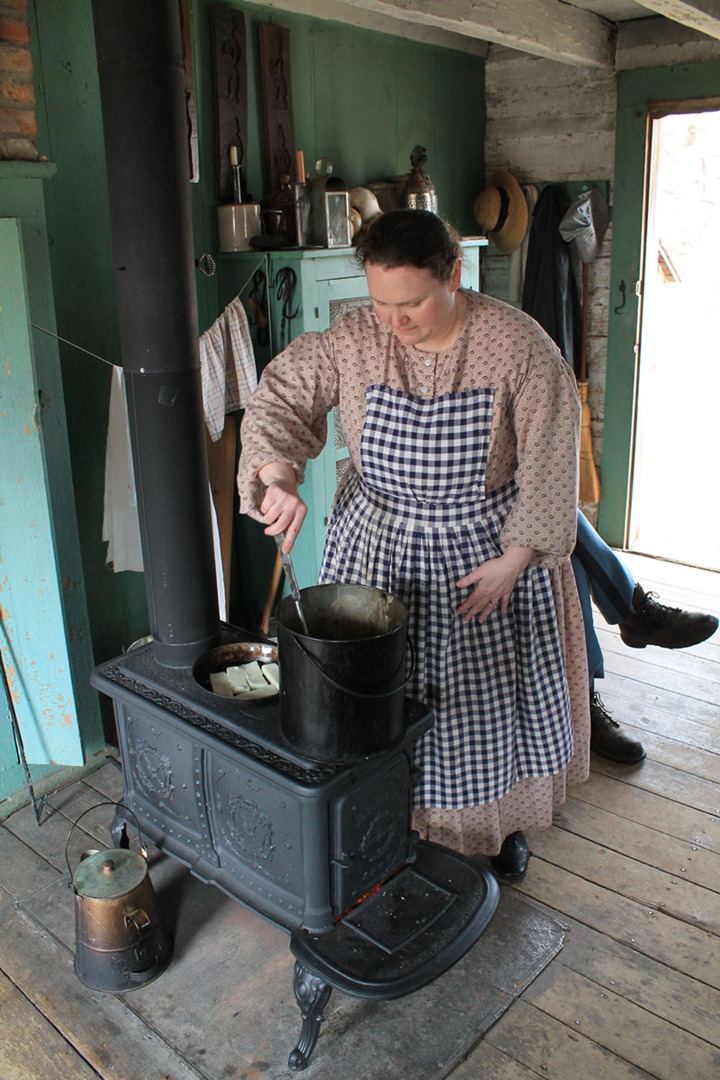 Glenwood Modern E No. 509 wood cook stove in its forever home in the Smokey Mountains of N. Carolina, - and re-named "Betty".